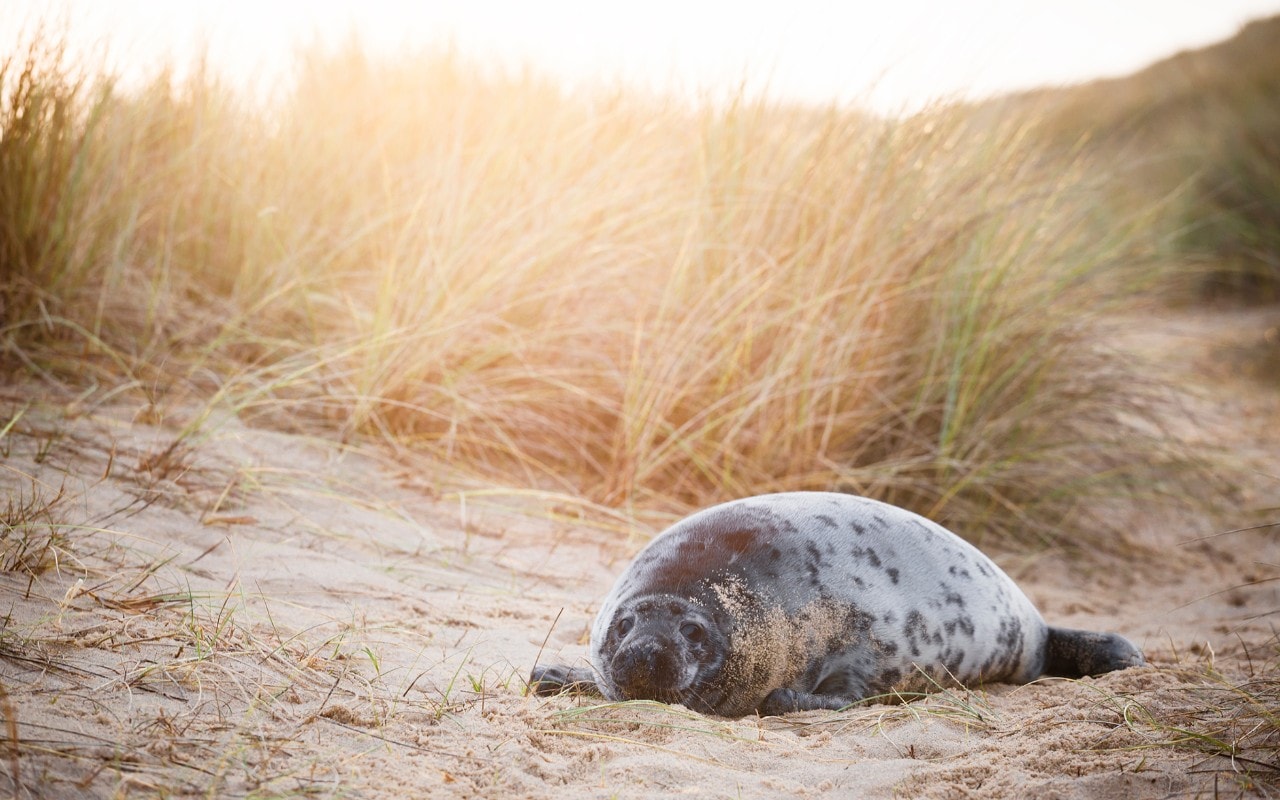 The beach is already crowded with sunbathers when I arrive. There they are stretched out on the sand without a care in the world. I couldn’t lay my towel between them if I tried. I’ve walked two miles to get here from my remote holiday home. If anyone deserves a lie down, it’s me. This lot look like they don’t even know the meaning of the word walk. So lazy, just lolling there scratching as they snooze; the oafs. One even has a pee while lying on his side. Shameless.

But this isn’t a post-rave chill-out of beer-bellied blokes, rather it’s one of the most marvellous wildlife spectacles in Britain. These blubbery idlers are Atlantic grey seals. They’re neither in the Atlantic nor grey but they are most definitely pinnipeds, hauled up on three miles of fine sandy beach in east Norfolk for their annual spring moult. There are thousands of them.

From only a couple of hundred seals about 20 years ago, Horsey Beach grey seal colony now numbers about 7,000. Relocation from an offshore sandbar that is now often underwater is thought to be one reason; improved fish stocks another. Between November and February, furry white pups gaze into telephoto lenses with big dark eyes. This season, a record 2,316 baby seals were born on the pale sands. The news made headlines around the country. What is less well known is that for the next few weeks, until mid-April or so, the seals are hauled out onto the beaches to slough off their spotty fur coats.

“The birthing season has the cute factor but the moult really has the wow factor,” says Peter Ansell, chair of the Friends of Horsey Seals. “People don’t expect to see so many, all so close together. When they have their pups, the seals are more spaced apart but during the moult they’re all close together. You could step from one side of the beach to the next on top of them. Not that you would…”

I had heard seals in the night. In the frosty cold, the dark northern sky scattered with stars, I slid open glass doors onto the verandah of our holiday home, built in a lee of dunes. There was the thud of waves on the beach and a strange howling. In the morning we discovered the source: 70 seals on the beach just the other side of the dunes. But the spectacle of thousands of the beasts is two miles further south, perhaps the most accessible seal colony in the country. According to our home’s visitor book, some seals – smaller harbour seals – can be seen in summer too. There were accounts of guests kayaking with them, using the kayaks stored in the garden shed.

Our accommodation is as well insulated against the cold as the seals. Designed by RIBA award-winning Mole architects, it is one of only a handful of holiday lets in the UK built to the ultra-low energy standard, Passivhaus. During a week in March, when nighttime temperatures plummeted so that the beach sand was crunchy with frost, the only active heating we needed was a towel rail, yet still the home was cosy.

Its location at the end of a sandy track, a minute’s walk from the sea in the tiny hamlet of Waxham (half a dozen houses, Norman church and an impressive thatched medieval barn) is perfect if you want to self-isolate.

The views through large south-facing triple glazed sliding doors are of fields where common cranes are sometimes seen grazing. Soon potatoes, carrots or asparagus would likely be growing in the fertile soil. “Norfolk is the main grower of most of the UK’s veg,” said Alex Firman, chef and owner of the new Coast Kitchen Cafe at nearby Grade I-listed Waxham barn, when he called by to deliver a cottage pie for our dinner. He also tells us how in the 16th-century the size of your barn was a status symbol. Waxham’s being the largest in the county reflects how important a place it was compared to the sleepy backwater it has become, not even significant enough to have a bus service. (The nearest bus stop is in Sea Palling, a mile away.)

Moulting seals aside, another reason to visit this part of England in early spring is to see the Broads with very few visitors. Hickling Broad, just six miles away, is not only the largest of the Broads, it has the largest reedbed in the country, a sight best appreciated from the top of a 60ft viewing platform on land owned by the Norfolk Wildlife Trust. Now the reeds are a restful pale gold but soon vivid spring growth will appear. A boat trip on the lake and channels, all edged with rustling reeds, is like a safari in the Okavango Delta, but without crocodiles. Instead, you may hear bittern booming or spy bearded tits.

Bob Morgan, a reserves officer and wildlife guide, tells us how, contrary to earlier theories that the Broads are the remains of an estuary, they are flooded peat-digging works, 2,000 years old. He tells us about a rare flowering water plant – lesser bladderwort – that had Kew botanists in tears of joy, and how the purple hairstreak butterfly – which, in summer, you can admire in the canopy of 16th-century oak trees from that tall viewing platform – sups on the honeydew of aphids. The Broads is also home to Britain’s largest butterfly: the swallowtail. While these are all treats for summer, there are many reasons – not least those lazy bathers – for going now.

How to do it

Keep your distance from the seals. Best to walk on top of the dunes or keep at least 10m away if walking on the beach. Keep dogs on leads.

For more information about the seals see www.friendsofhorseyseals.co.uk

Other attractions near Waxham

Horsey windpump. In 2019 this drainage windmill was restored to working order after 76 years.

East Ruston vicarage gardens, six miles from Waxham, is a sprawling 30-acre garden created by its owners over nearly 50 years. There are views to Happisburgh lighthouse, the only independently run lighthouse in the UK.